The p4 pupils of Inverkeithing Primary School took part in an art project in October 2015, as part of Rosie Gibson’s Luminate project ‘Trading Wisdom. They were asked to think about their own experience of living in Inverkeithing. The children were read a memory from a lassie in the 1950s, going to and fro the Caldwell Paper Mill every day and reflected on their own connection to her journey. What daily journeys do they undertake and what do they see on those journeys? 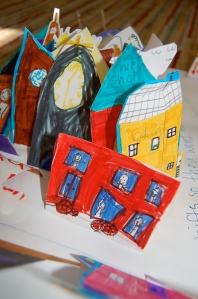 Rosie Gibson’s project took place in a variety of venues around Inverkeithing from  10th-17th October. She wanted the younger generation to be involved with her Luminate Festival 2015, a nationwide arts event based on inter-generational connections and creative ageing. She knew she wanted to use the following quote:

“My mother’s hoose was like a canteen. We went hame fae the mill for breakfast, lunch, then hame for the tea! And my brothers were on different shifts so they went hame at different times tae!”

She also knew that the children’s work would eventually become an artwork in the Millbrae Cafe, which is positioned at the top of the path which leads to the Caldwell Mill.

The rest of the creative development of the project was given by Rosie to IAI. Two hand-drawn street maps of the centre of Inverkeithing were created, with the quote itself written on the street, between the top of Mill Brae, along the High Street and down Townhall Street, the route to the children’ school. The children were invited to talk about and  respond to the quote. They imagined the young lassie, making her way, day after day, to and from the Mill to work. We asked, did they think that she would have seen the same things on her walk that the children can see today? 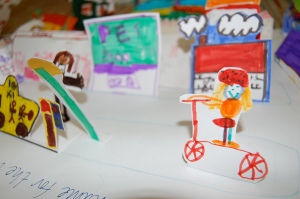 We were very impressed by how much the pupils warmed to the project. They were very interested and engaged, and had terrifically good memories, showing they have a real interest in their own environment and experiences.  They were excited about the  idea of representing their daily surroundings through art. Using brightly coloured pens and card, they drew, and created models, of everyday things they see in Inverkeithing; buildings, streets, lamps, people, animals, vehicles…. It became clear that little escapes their notice.

As well as being a part of Rosie’s Trading Wisdom project, the maps will continue to be proudly displayed at Inverkeithing PrimarySchool.

The maps were photographed and the images turned into place mats for the Mill Brae Cafe, where they are still being used daily by diners at the Millbrae Cafe, 58 High Street, Inverkeithing.